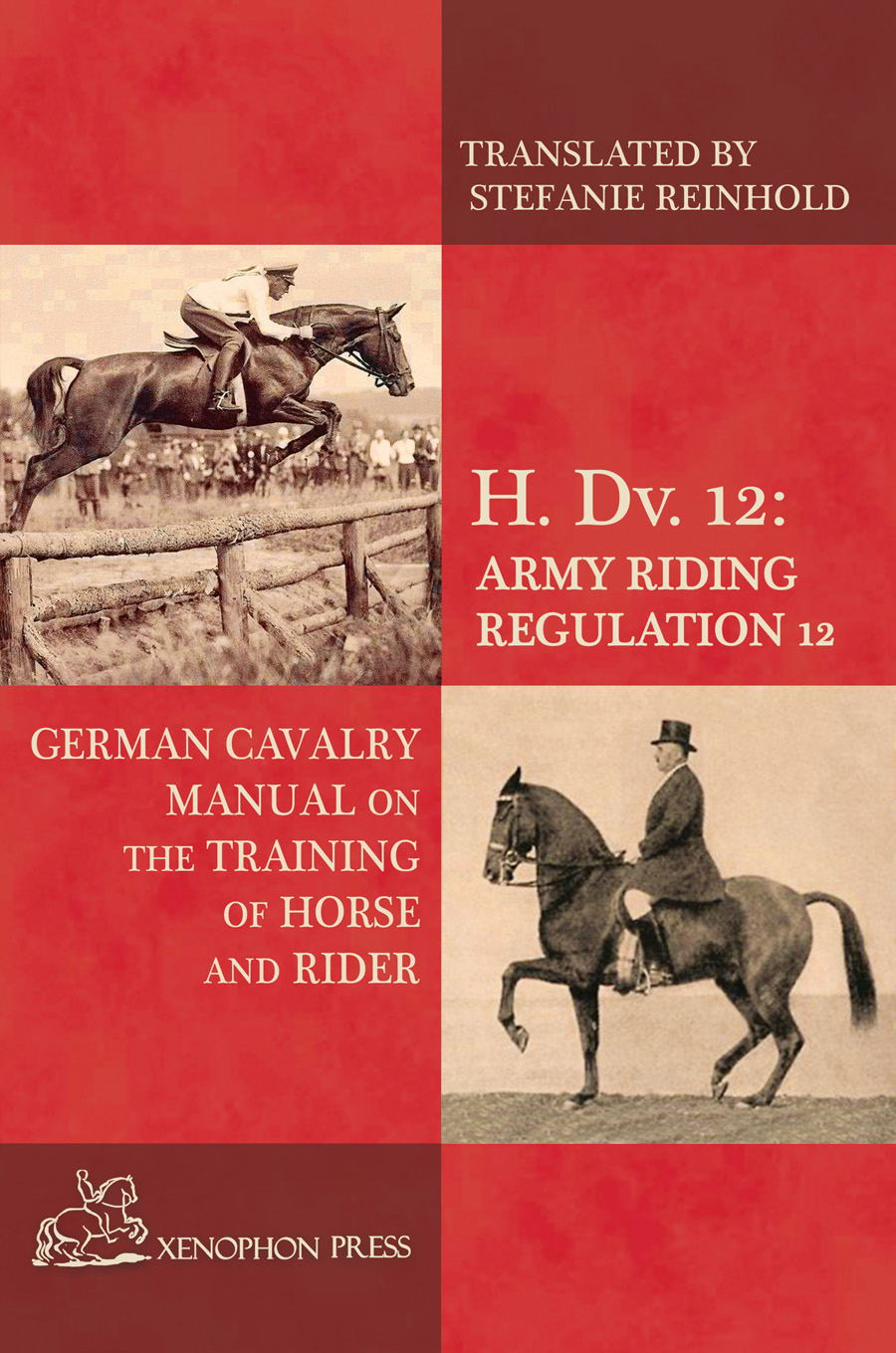 The School of Horsemanship (Ecole de Cavalerie) Part II by de la Gueriniere is a must for every rider. This book is the foundation of all present day schools of riding.

Dressage in the French Tradition by Dom Diogo de Braganca

Dressage in the French Tradition is a reference for the understanding of classical dressage in which the horse, ridden with the greatest impulsion and lightness, displays his maximum activity in response to the minimum effort of the rider.

The Riding Regulation H. Dv. 12 in its last edition of 1937 is the foundation of German classical horsemanship. Authored by the German cavalry experts and issued by the German army commander-in-chief, these guidelines governed all training of remounts and recruits with the goal of creating a sound, able, willing, and obedient military mount and equally capable rider. As the original source of the renowned Training Scale, the H. Dv. 12 also served as the basis for today’s FN Principles of Riding, the German National Equestrian Federation’s official instruction manual. 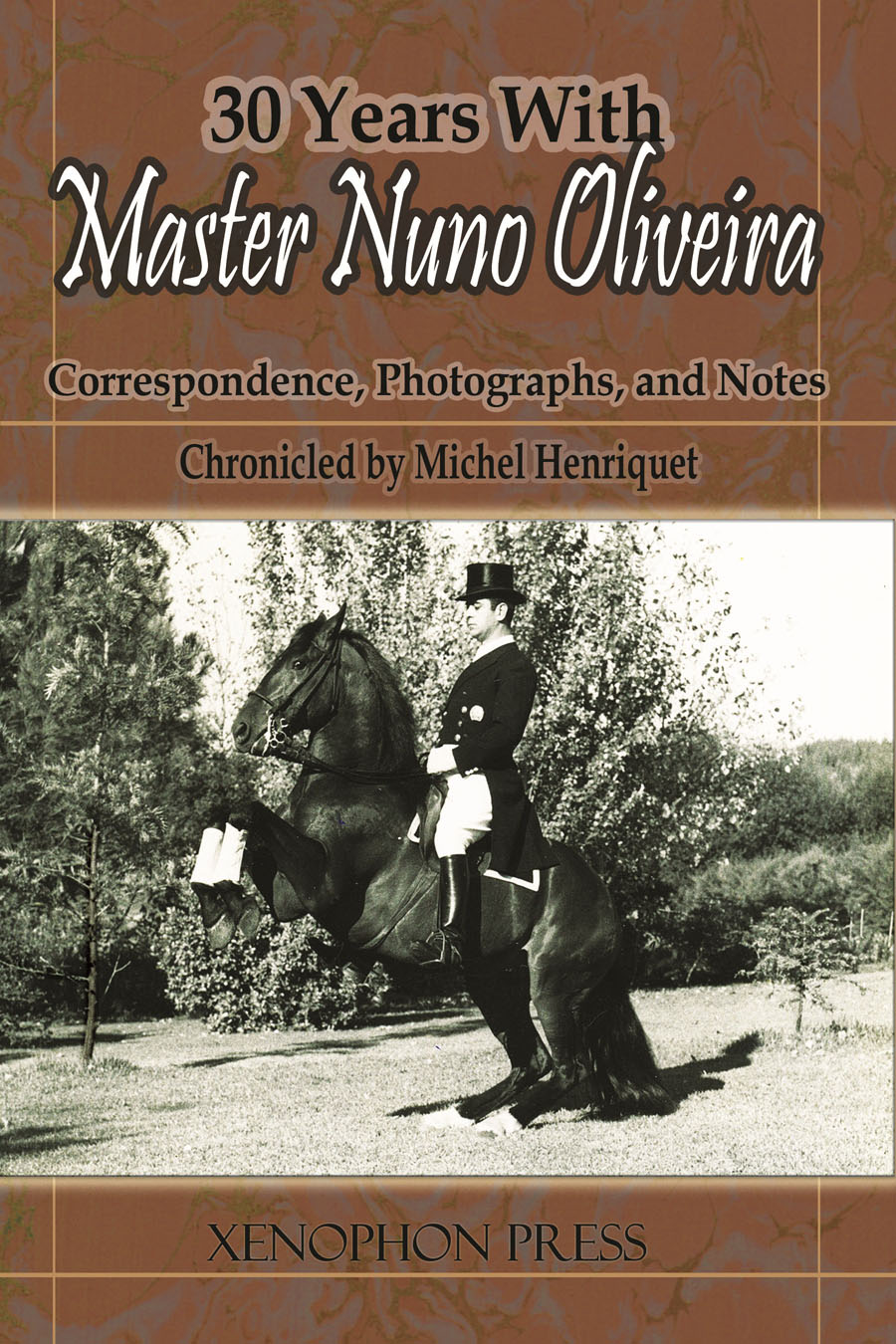 This classical text, which knowledgeable horsemen have been anxiously awaiting for years, is finally available in English. Henriquet's personal record of correspondence provides a unique window into the private problem-solving dialogue between master and student. Now a master écuyer in his own right, Michel Henriquet embellishes this new edition with 50 photographs from his personal collection. This first and only English edition includes many more photographs of Nuno Oliveira and his teacher than earlier editions. It has also been enhanced with a glossary and a descriptive table of contents for the 71 chapters. 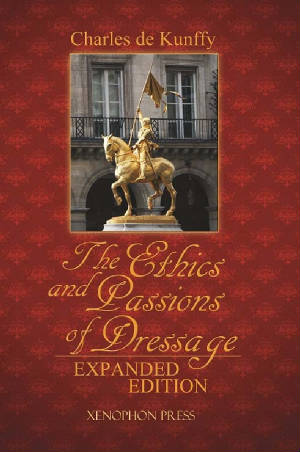 The Ethics and Passions of Dressage, Expanded Edition by Charles de Kunffy

This monumental contribution to equestrian literature is embellished with even more carefully-selected images of equestrian
statues than the original edition. The Ethics and Passions of Dressage, Expanded Edition also includes additional chapters,
recommended for the serious equestrian wanting to be simultaneously challenged and inspired. This book is sure to reaffirm
the rider’s dedication to an ethical approach to classical dressage.

“If you want to express the utter joy, the drive, the energy that takes you forward on your journey with horses,
it is here in this book.” -Sylvia Loch 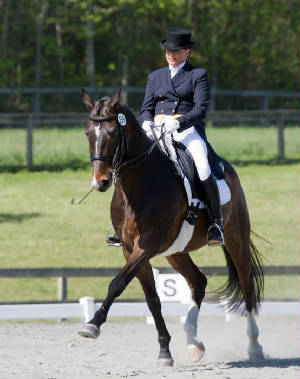 "My visit was beyond valuable and I appreciate you reminding me of many things that I have not heard in a while.  It is very refreshing to have a lesson from someone who not only connects everything with in depth explanation and thought processes but expects it to be done correctly and not just good enough with a bunch of empty praise." -A.T., NC

The following note was written by an adult student new to riding. She always had riding as a dream and was finally able to realize the dream after riding at Williams Dressage. This was written on the occasion of her first trail ride ever off the property:

I would like to make sure you know how much I enjoyed the trail ride. I very much appreciated your planning and consideration. You did surprise me and had a very safe and enjoyable ride planned -- thank you! I feel very fortunate to have you as my teacher.

The following article was written by Leslie Cline: the story of her horse Blackie (Genesis) and his training period at Williams Dressage with Richard Williams:

"The title of this article could include a trendy idiom like “when good horses do bad things” or “dressage horse gone wild” but that may minimize the frustration that we felt when my Grand-Prix trained dressage horse decided that he had had enough of dancing with me only a handful of months after his purchase.

I was not in the market for a new horse when my husband, David, bought “Blackie” for me. We had spent the past four years riding the roller coaster of Cushings Disease and its related laminitis rather than our lovely FEI horse El Chico. After the fourth -- and what I had decided to be the last -- founder, we said our goodbyes and prayed Chico would go to a place where his body would no longer be his limiting factor. Not too soon after that event, it was my husband who fell for the smile that riding Blackie brought to my face and purchased the talented gelding for me. And God Bless him for it! Little did we know this purchase would bring us the quintessential lesson in true horsemanship.

As both a trainer and a student, I have believed that the best way to learn dressage is to ride a horse who knew dressage. Over the past fifteen years, we have been very deliberate in purchasing trained horses that could help me further my experience. Simultaneously, I have been fortunate to have the opportunity to work students’ horses and project horses of my own to fine-tune and confirm what my horse masters were teaching me. Blackie was purchased as the ultimate master: he sported beautiful piaffe and a passage that would take one’s breath away. And he did this with the exuberance of an athlete who knew he would take center stage with each performance.

What I didn’t know was that emotionally and mentally he was on the edge of burnout - and when pushed close to the precipice by my primitive aids he exploded. We could go from walk to rear in a nano-second; from behind the aids to the emergency room in 20 seconds flat. My trainers were not sure how to help me ride through this, and we were working with some high-profile, very knowledgeable and experienced trainers. At every turn Blackie’s actions consistently told us he was through with dressage.

So what was next? Blackie’s re-schooling time with his former trainer was coming to an end, and David and I felt like we were running out of options. He had no trust in me or my system, and I was tired of his rearing and bucking. But that aspect of the situation was the least of my worries. In my mind, I was the proud owner of a beautiful and athletic Grand Prix horse with world-class gaits that I had reduced to a pasture ornament in just a short time. My confidence was destroyed. He was not ready to be a schoolmaster, and I was not the rider he felt he deserved. Where was the bridge that would help Blackie and me meet each other halfway?

Literally, that bridge went from Norfolk, Virginia to the Delmarva Peninsula.  We drove over that bridge to my friend Richard’s training farm at Hillcrest. We turned Blackie out in his pasture where he promptly breathed a huge sigh of relief. It was obvious to him that here at Richard and Frannie’s he could finally be what he was meant to be-- just a horse. He would be on 24/7 turnout with a run-in entrance to his stall -- something that I imagine given his training in Holland and Germany, he hadn’t had since he was a baby. Gone were the bubble wrap, the fancy equipment, and the pressured expectations. Our journey was to start “back” at the basics. We were to figuratively “peel the onion” and then put it all back together. And that we did.

Through Richard’s and Frannie’s program of varied work and play, Blackie learned to trust again. Richard literally re-started Blackie from the ground up, making sure that each element of the training scale was thoroughly in place.  In the Williams’ thoughtful and progressive program, Blackie learned to breathe during those movements that had caused him angst. He saw that Grand Prix work wasn’t a time for stress but a time for play. He learned to be more tolerant of the rider’s movements.  But it wasn’t enough for Richard to “decipher” the aids that spoke to Blackie and help him relax in them -- he had to translate these to me. And that he did! Countless hours of study were followed by even more hours in the saddle refining my equitation and my own aiding systems.  Richard’s instruction confirmed to me the teachings of our mentors and the modern-day classical masters. To me, it felt good to be “home.”

I started my article with some current idioms and I am going to sum up with a variation on another popular catchphrase. We hear a lot today about ‘horse whisperers’. This school has made mainstream the age-old classical system of training through light, consistent, cause-and-effect aiding and communication. Richard took this classical system one step further -- As true horsemen, he believes we are also to be “horse listeners.”  Each horse and his needs are as individual as you and I. The challenge is to listen to and to train these individuals in the classical system that allows for and respects their individuality. Isn’t the purpose of dressage to make even more beautiful under saddle those athletic movements a horse does naturally? The horse already knows how to be himself; what makes this sport into art is to train in a way that allows for the horse’s individual expression. What makes trainers into artists is the ability to perpetuate this from horse to horse and from trainer to rider.   Thank you, Richard, for sharing your knowledge and skills with Blackie and me.

What was Blackie trying to tell us?  He communicated in the only way he knew– through tension and rebellion. I have yet to have a horse come through my stable who didn’t own some well-worn baggage. However, Blackie and I were able to return home carrying instead some brand-new Luis Vuitton.

From our experience at Richard and Frannie’s, Blackie and I now have a foundation of knowledge and training on which to meet each other halfway -- common ground where he is more forgiving of those days my aids are clumsy and unsophisticated, and where I appreciate his need for both perfection and play. We went on the following year to earn the final scores for my USDF Silver Medal. But that wasn’t the gift. The best part was just being able to ride my horse -- the horse we bought -- my ultimate School Master."*

*As a follow-up, Leslie and Blackie were in training for 7 months, after which we called Leslie to come and get her horse as he was on the right track. Re-uniting horse and rider is what we love to do. Helping each rider understand the peculiarities of their unique horse and the implicit requirements of a successful relationship for advancement through the levels is our goal.

Here are some of our favorite sites

www.FoundationForClassicalHorsemanship.org dedicated to educate those interested in learning about the history, theory, principles and techniques of classical equitation.

www.BeingWellatHillcrest.com Our Health and Wellness site

For more information on this service to Riders and their family and friends, contact us at BeingWellatHillcrest@Verizon.net or at 1-757-414-0393.Visit Dr. Williams' medical website: www.FrancesWilliamsMD.com

Williams Dressage is located on the picturesque Eastern Shore of Virginia. Richard and Frances Williams offer unique, customized services for the serious equestrian.

Sign up for the latest news, offers and styles